It’s been 50 years since Peter Fonda (RIP!) co-wrote and co-starred in Easy Rider. It’s also the 50th anniversary of the Manson family murdering Sharon Tate, a subject Quentin Tarantino tackles in Once Upon a Time in Hollywood. Tarantino’s contemporary, Steven Soderbergh directed a slept-on neo-noir in 1999 called the Limey. What do all of these things have in common? The 60s, man. Or, more precisely, the memory of the 60s.

What’s the difference between our memories of the past and our dreams about the future? Aren’t both unreliable representations of reality? Those questions remain with me after recently watching Soderbergh’s The Limey. The other question I have is why don’t people talk about this movie more? It features great late-period performances from 60’s film icons Peter Fonda and Terrence Stamp. And it’s a fast-paced, action-filled revenge movie. You’d think it would find some sort of audience. So why isn’t there more love for The Limey?

It did come out in a year crowded with excellent movies: The Matrix, Fight Club, Being John Malkovich, Boys Don’t Cry. I could go on. Someone even wrote a book about 1999 films. You could also argue that because Soderbergh is a very prolific, talented filmmaker, some of his movies have gotten lost amidst the celebration and hype of his other work.

I think the main issue is that there is a slight accessibility problem with Soderbergh’s ninth film, which shares some similarities to Quentin Tarantino’s ninth film, Once Upon a Time in Hollywood. Both are fixated with the 1960s. But where Hollywood offers a warm, sentimental, pop-culture-filled fantasy about the late 60s, The Limey is a fragmented jumble of distorted memories from that decade mixed in with the scrambled reality of the present.

The impeccable editing from Sarah Flack is disorienting in a good way. You’re never sure if you’re watching an extended flashback or flash-forward, ensuring that your eyes stay glued to the screen to find out which. The film even features footage from a 60’s Terrance Stamp movie as a flashback, which also reminded me of Hollywood. But instead of Margot Robbie watching the real Sharon Tate, we have an older Terrence Stamp watching the younger Terrence stamp. 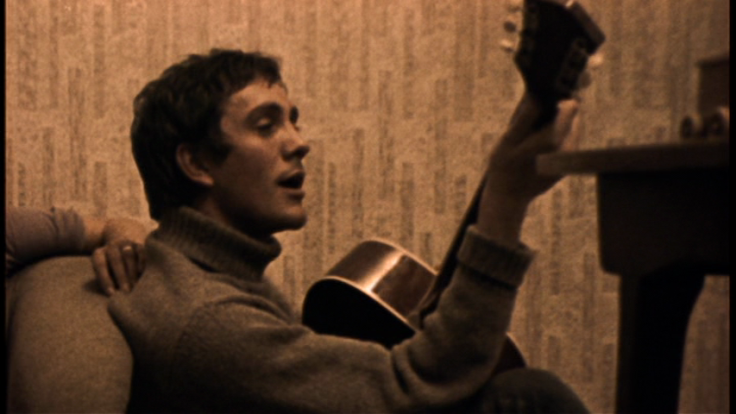 I loved all of this editing trickery. But I could also see it alienating general audiences. Which I’m assuming it did because the Limey, made for 10 million, only made three million at the box office. Hollywood exceeded expectations, making about 40 million in its first weekend. Both movies are, in their own ways, tributes to the films and stars of the 60s. So why was Hollywood so much more successful?

The answer lies in how the two films approach memory. The fashion, music, films, and other pop culture references sprinkled throughout Hollywood are there to conjure nostalgic feelings about the 60s, even for those who didn’t live through that time but are obsessed with it anyway (yours truly). The Limey, on the other hand, is almost anti-nostalgia. It’s set in the 90s, and you never see or hear characters fondly remembering or reminiscing about living through the 60s. The closest we get is when a younger character asks Peter Fonda what it was like then. He responds with the following soliloquy:

Did you ever dream about a place you never really recall being to before? A place that maybe only exists in your imagination? Some place far away, half remembered when you wake up. When you were there, though, you knew the language. You knew your way around. That was the sixties.

After he beat, he corrects himself, “No. It wasn’t that either. It was just ’66 and early ’67. That’s all there was.” Although Fonda’s character is reprehensible in the film, he shows a surprising amount of self-awareness. Sometimes our memories trick us; they conflate time periods and often take on an inaccurate rose-colored tint.

I think Tarantino knows this too. If you’ve seen Hollywood, you know that this is clearly his distinct vision of the 1960s, even if it does feature actors playing real people from the time. But instead of focusing on the fragmented, unreliable nature of memory like Soderbergh, he falls into the warm embrace of nostalgia.